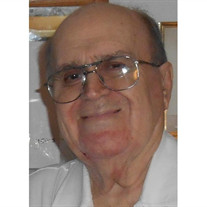 William E. Kruse, age 92, of Trenton, passed away on Saturday, May 8, 2021 at Beaumont Hospital in Trenton, Michigan. Born on December 28, 1928 in Toledo, Ohio, he was the son of Edward and Hazel (Pountney) Kruse Sr. On February 5, 1949 he married Mary Hargis in St. Mary's Catholic Church, Rockwood, MI. He was employed with DT&I / CN Railroad as a Yard Master until retiring in 1986. He was a member of the DT&I Ol'Timers. William was a graduate of Flat Rock High School Class of 1948, he is in the Flat Rock HS Hall of Fame. He was MVP, and Captain of the 1947 undefeated Rams Football team. He was an avid photographer since high school. William was preceded in death by his parents and brothers Edward Jr. and Richard. He is survived by his wife, Mary Kruse; son, Michael (Nancy Baldwin) Kruse, daughter, Nancy (Richard) Martinez, son, Dennis Kruse, son, Donald Kruse, son, Gary (Lisa) Kruse, grandchild, Steven Kruse, grandchild, Erika (John) Nutter, grandchild, Marty (April) Martinez, great-grandchildren Maria, Vincent, and Mason and brother, Robert (Joyce) Kruse. Friends may visit in the Bobcean Funeral Home, Flat Rock Chapel on Thursday, May 13, 2021 from 2:00 pm to 7:00 pm. Burial will be in Our Lady of Hope Cemetery, Brownstown, Michigan on Friday, May 14, 2021 at 11:00 am.

The family of William E Kruse created this Life Tributes page to make it easy to share your memories.

Send flowers to the Kruse family.