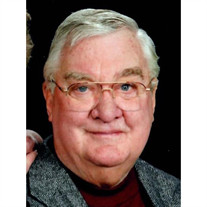 William “Bill” Dobberstein, 78, of Carleton, passed away peacefully holding his wife’s hand on Sunday, March 31, 2019 at IHM Health Care Center with his family by his side. Bill was born on June 11, 1940, as the second son to Frank and Eleanor (Labo) Dobberstein. He graduated from Airport High School in 1958. Bill worked for Elliott’s TV right out of high school. He then opened his own TV and appliance repair business in his garage. For a short time, Bill drove school bus for Airport Schools. Bill worked 30 years at Ford Motor Company as a machine repairman at Woodhaven Stamping, retiring in 1995. Bill was a farmer his entire life and this was his passion. He married Joan Cousino on October 22, 1960, at St. John’s the Baptist Church in Monroe. Bill and Joan were married for 58 years. He was active with his sons and grandsons with garden tractor pulling for many years. He was a lifelong parishioner of Divine Grace Catholic Church, and an usher and member of the Men’s Club. He belonged to the UAW and Southeast Michigan Antique Engine and Tractor Association where he attended tractor shows with his beloved Farmall 300. He enjoyed traveling with Joan out west, Alaska, Hawaii, Cozumel, short road trips, and casinos trips. To keep and cherish his memory Bill leaves behind his wife Joan, two sons, Joseph (Mary) Dobberstein of Monroe, David Dobberstein of Carleton, and a daughter Michele (Darryl) Sims of Carleton, three grandsons Brent (Heather) Sims, Eric Sims, Kyle Sims, and three great-grand children Kaleb Sims, Brody and Elizabeth Sims, brother Frank (MaryAnn) Dobberstein, and sister-in-law Sue Dobberstein. Bill was preceded in death by his parents and a brother Robert Dobberstein. Family and Friends may visit from 2 p.m. to 8 p.m. on Tuesday, April 2, 2019 at Arthur Bobcean Funeral Home, Carleton Chapel, 1142 Monroe St, Carleton, Michigan 48117. On Wednesday, April 3, 2019, he will lie in state at 10 a.m. at Divine Grace Church, 2996 W Labo Rd, Carleton Michigan 48117. Services celebrating his life will begin at 11 a.m. Burial will immediately follow at the parish cemetery. Memorial donations are suggested to Divine Grace Church or Saint Patrick’s School.

The family of William A. Dobberstein created this Life Tributes page to make it easy to share your memories.

Send flowers to the Dobberstein family.