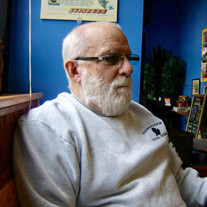 Thomas W. Lowe, age 73, of Flat Rock, passed away on Thursday, October 18, 2018 at Beaumont Hospital in Trenton, Michigan. Born on September 8, 1945 in Pasadena, California, he was the son of William and Alice (Keiser) Lowe. On March 24, 1973 he married Sharon Utterback in Mt. Pleasant, Michigan. Thomas served in the US Navy from 1965 to 1969. He was employed with Ford Motor Company as a Purchasing Manager until retiring in 2005. Thomas was a member of Community Lutheran Church, Flat Rock, MI. He enjoyed trail riding dirt bikes and ATV's. On occasion he would give Jim Engelbert 10 minutes notice to be ready so they could head up north to go trail riding. He was the Trail Master in charge of Come Ride with Us and was nicknamed the Old Trail Master. He helped the Come Ride with Us organization to raise money for shoes for needy children through the Helping Hands Program at Community Lutheran Church. He also taught economics class for Bob Peters. Thomas was preceded in death by his parents and a son Mark T. Lowe. He is survived by his wife, Sharon Lowe of Flat Rock, sons Scott Lowe of Flat Rock and Paul (Katina) Lowe of Denver, Colorado; grandchildren, Abbi, Harlie and Mikayla and a godson Reagan Engelbert. Friends may visit in the Community Lutheran Church in Flat Rock, MI on Tuesday, October 23, 2018 from 1:00 pm to 8:00 pm. Funeral Services will be held at Community Lutheran Church Tuesday evening at 6:00 pm. Rev. Erik Schmidt will officiate the service. Military Honors will be accorded by the Downriver Veterans Honor Guard. Burial will be in Michigan Memorial Park, Huron Township, Michigan. In lieu of flowers contributions in his memory may be made to the Community Lutheran Church, Flat Rock, Michigan.

The family of Thomas W. Lowe created this Life Tributes page to make it easy to share your memories.

Send flowers to the Lowe family.