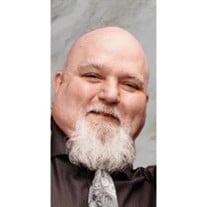 Russell J. “R.J.” Wells, 54, rode through heaven’s gates unexpectedly September 25, 2020 at his residence in Carleton, MI. Born April 24, 1966 in Fort Wayne, IN to Russell G. & Norma L. (Jacobs) Wells. R.J. grew up in Thorncreek Township & graduated from Columbia City Joint High School in 1985. He was a 10 year member of 4-H. During high school he was a member of the FFA, Show Choir, he also played basketball & football. R.J. was Employed by Edward C. Levy Corporation for nearly 20 years as a heavy equipment operator & supervisor. He started his career with Levy at Butler Mill Service. Throughout his time with the company he saw many new cities with moves to Portage, IN; Memphis, TN; Columbus, MS & Detroit, MI. He never met a stranger & collected new friends in all of his new locations. Family meant the world to R.J. any chance to spend time together was welcomed & served as the perfect excuse for a game of Euchre to commence. His daughters were always placed atop pedestals until they were dethroned with the arrival of his beloved grandchildren. He loved life, horses, dogs, & sports. A hardcore The Ohio State University fan The Buckeyes will be with him for eternity. He enjoyed rooting for all Chicago Teams (EXCEPT THE SOX!) He also lived to ride his Harley & rode any chance he could. He enjoyed visiting new Harley-Davidson locations, his collection of shirts could draw us a map of his travels. R.J. was a member of IUOE Local 324, Forest Lodge #239 F&AM, Scottish Rite, Mizpah Shrine, Hillbilly Clan, American Buckskin Registry Association, Buckskin Horse Association of Michigan & Great Lakes Buckskin Horse Association. He is survived by his daughters Belinda (Travis) Rider of Larwill, IN, Bethany (Jake) Smarker of Glenpool, OK, Brytnee (Greg) Heck & Brieann Wells of Columbia City, IN; father Russell G. Wells of Columbia City, IN; Sister Tamara (Tony) Thornton of Columbia City, IN; Brother Carl (Julie) Wells of Acworth, GA, his 5 grandchildren Alexys & Andreu Rider, Bentley & Levi Heck and Jasmine Wells. He was preceded in death by his mother Norma Wells. As a final parting gift to the world R.J. chose to be an organ & tissue donor. A gathering of friends & family will take place at Wolf Lake United Methodist Church 1186 US-33 Albion, IN 46701 October 8, 2020 from 1-6pm, service immediately following with Pastor Larry Schmoekel officiating. With COVID considerations there will be feeds via both Zoom & Facebook Live of the service for those who cannot attend in person. In lieu of flowers contributions in his memory may be made to the family for his grandchildren’s college education. In preparation for us all to see the smokin’ hot body he’s always dreamt of cremation has taken place.

The family of Russell J. Wells created this Life Tributes page to make it easy to share your memories.

Send flowers to the Wells family.