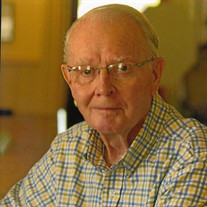 Ronald G. Klingel, age 85, of Flat Rock, passed away on Thursday, June 11, 2020 in Flat Rock, Michigan. Born on October 4, 1934 in Cardington, Ohio, he was the son of Merrill and Hilda June (Callihan) Klingel. On December 1, 1956 he married Carol McLaughlin at Christ Lutheran Church, Monroe, MI. He was employed with Ford Motor Company, Monroe, MI in Production and Supervision for 40 years until retiring. Ron was a graduate of Airport H.S. Class of 1953. He served in the US Army 1957 to 1959. Ron was a Charter member of the Flat Rock Historical Commission, life member of the Flat Rock Historical Society, life member of the Flat Rock Elks Lodge 1731, and served on the Flat Rock Volunteer Fire Department for 10 years. Ron was preceded in death by his parents and a nephew Ronald Abriel. He is survived by his wife, Carol Jean Klingel, sons Craig (Kellie) Klingel and Kenneth (Kimberly) Klingel; grandchildren Alexander Klingel, Mark Klingel, Veronica Klingel, a sister Marilynn Tinsley, and niece Carla Stamatis. Friends may visit in the Bobcean Funeral Home, Flat Rock Chapel on Sunday, June 14, 2020 from 1:00 pm to 6:00 pm. Due to limitations set by the State of Michigan only 10 people may gather in the funeral home at a time. A private burial will be in Michigan Memorial Park Cemetery, Huron Township, Michigan on Monday, June 15, 2020. In lieu of flowers contributions in his memory may be made to the Elks 365 Crippled Children's foundation

The family of Ronald G. Klingel created this Life Tributes page to make it easy to share your memories.

Send flowers to the Klingel family.