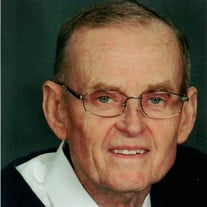 Ronald F. Bergmooser, age 84, of Carleton, passed away on Tuesday, February 12, 2019 at Immaculate Heart of Mary in Monroe, Michigan. Born on February 16, 1934 in Carleton, Michigan, he was the son of Arthur and Viola (Blanchett) Bergmooser.... View Obituary & Service Information

The family of Ronald Bergmooser created this Life Tributes page to make it easy to share your memories.

Ronald F. Bergmooser, age 84, of Carleton, passed away on Tuesday,...

Send flowers to the Bergmooser family.