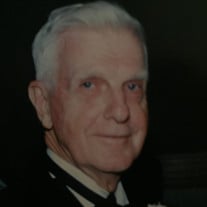 Ronald L. Baker, age 91, passed away peacefully on Tuesday, February 26, 2019. Born on July 18, 1927 in Napoleon, Ohio. He was the son of the late Granville M. and Geraldine A. (Hahn) Baker. Ron’s early childhood was spent in Ecorse before his family moved to Evergreen Street in Flat Rock. He graduated from Flat Rock High School in 1945. Ron was drafted into the Army and served at the end of WWII. Ronnie the Mailman worked for the Flat Rock Post Office for more than 34 years. He enjoyed walking his route and his many customers (but not their dogs). He was blessed with more than 33 years of good health and happiness during his retirement. Ronald was a lifetime member of St. Roch Catholic Church in Flat Rock and also attended St. Mary’s Catholic Church in Rockwood. On many Mondays he enjoyed the company of his senior friends at the Carleton VFW Hall. Ron was proceeded in death by his parents, infant son Steve Baker, brother Wendell Baker, sister Carol Bates and brother-in-law Mike Pfau. He is survived by his seven children and twenty grandchildren: Sheila (Al) Traczuk, Hannah and Hayley; Starr (Robert) Kramer, Jack(Julie), Ryan, Mitchell and Brett; Sallie Baker-Kne, Robert, Andrew, Amanda and Joshua; daughter Shirlee Baker; son Sam Baker, Brittany, Matthew, Andrea, Jake and Luke; Sara (Benjamin) Ayotte, Victoria, Jonathan and Benjamin; Stacey (Scott) Arnst, Sonia and Autumn. He is also survived by his brother Granville Baker, sister Patricia Pfau and Brother-in-law Donald Bates; many nieces and nephews. Visitation will be at St. Roch Catholic Church in Flat Rock, Monday, May 13, 2019 at 10:00 am. Funeral Mass will begin at 11:00 am with Father Ray Lewandowski officiating the service. Burial will follow in the afternoon at Michigan Memorial Park Cemetery in New Boston MI. In lieu of flowers, contributions in his memory May be made to St. Roch Catholic Church.

The family of Ronald L. Baker created this Life Tributes page to make it easy to share your memories.

Send flowers to the Baker family.