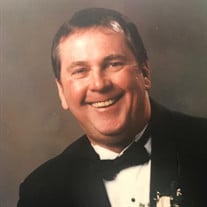 Richard (Dick) Arthur Greca Jr. lifetime resident of Carleton, MI. passed away Thursday afternoon in the home he had built for his family. He fought valiantly after his debilitating stroke in 2012. Born March 2, 1942 in Monroe, from the union of Richard and Dorothy (Scheffler) Greca. He married Marie Reaume and from their union they had four children Lori (Paco) Johnson, Jan (Richard) Motoligin, Jon Greca, and Debbie (Schon LaBell) Lambrix. Dick was blessed with 10 grandchildren; Tyler, Ryan, Erika, Ashleigh, Brandon, Mikala, Courtney, Sydney, Olivia, and Mariena. He is also survived by four brothers; Larry (Joyce), Bob (Sandy), Garry (Vern), and Gerry (Brenda) and sister-in-law Connie. He was preceded in death by both his parents and brother Dan. He attended grade school at St. Patrick in Carleton, high school at Monroe Catholic Central, and Henry Ford Community College. He was an altar server and usher at St. Patrick. He appreciated vestiges of God in nature. He retired at a young age allowing him to further pursue his interests. He was an avid car enthusiast and loved spending time with his horse ‘Maude’. He enjoyed the outdoors and spending his free moments hunting trophy bucks on his property in Gaylord. He enjoyed boating, his favorite part of boating was teaching his children how to water ski on the lakes across Michigan. He was known to see how many skiers he could pull at a time, 7 being his personal best. He instilled a love and appreciation of sports in his children. He was a hard worker and expected the same from those around him. He worked at Silica Stone before beginning his career as a Supervisor at Ford Motor Company where he retired from. Friends may visit in the Arthur Bobcean Funeral Home, Carleton Chapel on Monday, July 22, 2019 from 1:00 pm to 8:00 pm. A rosary service will be held at the funeral home on Monday, July 22, 2019 at 7:00 pm. Funeral Services will be held at Divine Grace Catholic Church on Tuesday, July 23, 2019 at 11:00 am. He will lie instate from 10:30 am until time of service. Burial will be in St. Patrick Cemetery, Carleton, Michigan. In lieu of flowers, memorials may be made to NRA or The Trump Campaign.

Richard (Dick) Arthur Greca Jr. lifetime resident of Carleton, MI. passed away Thursday afternoon in the home he had built for his family. He fought valiantly after his debilitating stroke in 2012. Born March 2, 1942 in Monroe, from the union... View Obituary & Service Information

The family of Richard A. Greca Jr. created this Life Tributes page to make it easy to share your memories.

Send flowers to the Greca family.