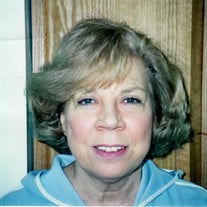 Patricia T. Wright, age 74, of Flat Rock, Michigan passed away on Saturday, December 8, 2018 at Rivergate Terrace in Riverview, Michigan. Born on June 28, 1944 in Detroit, she was the daughter of Anthony and Theresa (Kenyon) Peters. On September 18, 1965 she married Kenneth Wright in River Rouge, MI. Music was Patricia's (Patti) life. Patti started playing piano at age 3. Taught by her father Tony. She was a standout in her talent as she possessed the ability not only to play, but sing, write and arrange music. She went on to become a piano teacher at age 16 and continued to do so for 50 years, teaching many students in the downriver area as well as teaching music at St. Francis Assisi Catholic School in Detroit for a couple years in the mid 1980's. She also played and sang with numerous bands throughout her lifetime, and was organist and choir director for different Catholic Churches downriver. She also entertained at several different retirement homes many times later in her career with her husband of 53 years, Kenneth. One moment she was most proud of was when she played piano on the Lawrence Welk stage, in in Branson, Missouri. Her talent lives on in that of her students. Patricia was preceded in death by her parents, 3 brothers, Bob Sheridan, Tommy Sheridan, Christopher Hinderliter and sister, Ruth Allen. She is survived by her husband, Kenneth Wright of Flat Rock; daughter, Nancy (Gary) Andrews of Flat Rock; granddaughter, Amanda Andrews; great-granddaughter, Zoey and brother, Don (Barbara) Sheridan of Milford. Friends may visit in the Arthur Bobcean Funeral Home, Flat Rock Chapel on Tuesday, December 11, 2018 from 1:00 pm to 8:00 pm. and Wednesday December 12, 2018 from 12:00 pm to 8:00 pm. Funeral Services will be held in the Funeral Home on Thursday, December 13, 2018 at 10:30 am. There will be an hour of visitation before funeral services begin. Father John Hedges will officiate. Burial will be in Michigan Memorial Park, Huron Township, Michigan. In lieu of flowers contributions in her memory may be made to the American Cancer Society or St. Jude's Children Hospital.

Patricia T. Wright, age 74, of Flat Rock, Michigan passed away on Saturday, December 8, 2018 at Rivergate Terrace in Riverview, Michigan. Born on June 28, 1944 in Detroit, she was the daughter of Anthony and Theresa (Kenyon) Peters. On September... View Obituary & Service Information

The family of Patricia T. Wright created this Life Tributes page to make it easy to share your memories.

Send flowers to the Wright family.