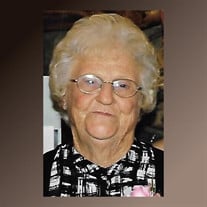 Patricia June Pfau, age 89, of Brownstown, Michigan passed away on Tuesday, March 19, 2019, at Beaumont Hospital in Trenton, Michigan. Born on September 25, 1929, in Napoleon, Ohio, she was the daughter of Granville and Geraldine (Hahn) Baker. She graduated from Flat Rock High School in 1946. In October of 1952 she married WWII veteran Edward Browning Pfau (Hillsdale, MI) in Flat Rock, MI. She was employed with Brownstown Township as Deputy Clerk for 20 years until retiring in 1988. She was named honorary Clerk for her dedicated years of service in 1987. Patricia was a member of St. Roch Catholic Church (Flat Rock, MI), the Ladies Auxiliary of the Flat Rock VFW, Brownstown Beautification Commission and the Democratic Club. She was very active in church helping with funeral dinners, counting money and with the Seniors group. Patricia loved quilting and watching the Detroit Tigers. She was preceded in death by her parents, husband, brothers Wendell and Ronald Baker and a sister Carol Bates. She is survived by her son, Michael (Patricia Brinson) Pfau; grandchildren Melissa (Jason) Roland, Melinda (Robert) Mendal, Erica (Grant) Thomas, Jason (Casey) Reeves, and Jessica (Donny) Cicotte; great-grandchildren Benjamin, Katelyn, Robert and Jonathan (Melinda), Samantha, Brady and Britton (Melissa), Maxwell, Grant and Ben (Erica), Avery and Brady (Jason). She is also survived by her brother Granville Baker. Friends may visit in the Arthur Bobcean Funeral Home, Flat Rock Chapel on Monday, March 25, 2019, from 1:00 pm to 8:00 pm. Funeral services will be held at St. Roch Catholic Church on Tuesday, March 26, 2019, at 10:00 am. She will lie in state from 9:30 am until the time of service. Father Ray Lewandowski will officiate the service. Burial will be in Oak Ridge Cemetery, Flat Rock, Michigan. In lieu of flowers, contributions in her memory may be made to the American Cancer Society (for her late husband) or Thyca.org (for her great granddaughter Samantha).

Patricia June Pfau, age 89, of Brownstown, Michigan passed away on Tuesday, March 19, 2019, at Beaumont Hospital in Trenton, Michigan. Born on September 25, 1929, in Napoleon, Ohio, she was the daughter of Granville and Geraldine (Hahn) Baker.... View Obituary & Service Information

The family of Patricia J. Pfau created this Life Tributes page to make it easy to share your memories.

Send flowers to the Pfau family.