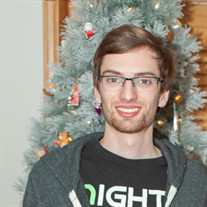 Nick Virag, our beloved son passed away Saturday 4/17/2021 at age 25. Born 5/16/1995 in Dearborn, MI. Survived by mother Colleen Virag (Mylenek), father Joseph Virag and sister Katherine Virag. He will be dearly missed. He looked up to his... View Obituary & Service Information

The family of Nicholas J. Virag created this Life Tributes page to make it easy to share your memories.

Send flowers to the Virag family.