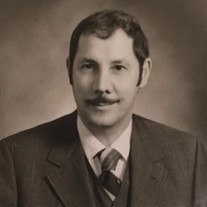 Dr. Michael Bousamra, age 92, of Flat Rock passed away on Monday, November 26, 2018. Born January 5, 1926 in Detroit, Dr. Bousamra was the son of Tony and Mary (Raad) Bousamra. He fought in WWII in the European Theatre as an infantryman in the Battles of the Bulge, the Rhine and the Rhone. He attended college at Michigan State Normal then he attended Osteopathic School in Des Moines, where he met Shirley Fryslie, a nursing student from Webster City, Iowa. The two married, and after his graduation moved back to Detroit where he began his medical career. He interned at Detroit Osteopathic Hospital and had medical practices in Detroit, Livonia, Sandusky (Michigan) and Flat Rock. They raised their four children in Flat Rock, where he and Shirley served the community for 35 years in their family practice. Dr. Bousamra was a member of the American Osteopathic Association. He enjoyed all sports, especially golf and football. He was also an auto racing enthusiast. He was preceded in death by his parents, his sister Masaday, his brother Thomas, and his beloved wife of 52 years Shirley. He is survived by his children Michael (Mary) of Louisville, Kentucky; Kristine (Dr. Mark) Ginther of Midland; Steven of Carmel, Indiana; Joseph (April) of Commerce Township; 12 grandchildren and 2 great-grandchildren. His family extends their deepest gratitude to the staff at Nazareth Home-Clifton in Louisville, Kentucky for their loving care of "Doc". In lieu of flowers, contributions in his memory may be made to St. Roch Parish. Friends may visit in the Arthur Bobcean Funeral Home, Flat Rock Chapel on Thursday, November 29, 2018 from 2:00 pm to 8:00 pm. Funeral Services will be held at St. Roch Catholic Church on Friday, November 30, 2018 at 10:00 am. He will lie instate from 9:30 am until time of service. Fr. Ray Lewandowski will officiate the service. Burial will be in Huron Valley Cemetery, Flat Rock, Michigan.

Dr. Michael Bousamra, age 92, of Flat Rock passed away on Monday, November 26, 2018. Born January 5, 1926 in Detroit, Dr. Bousamra was the son of Tony and Mary (Raad) Bousamra. He fought in WWII in the European Theatre as an infantryman in... View Obituary & Service Information

The family of Michael Bousamra, D.O. created this Life Tributes page to make it easy to share your memories.

Send flowers to the Bousamra, family.