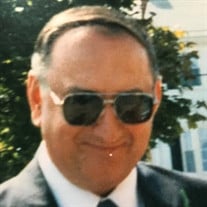 Maurice B. Raymo, age 83, of Carleton passed away on Wednesday, November 13, 2019 at Regency at Canton in Canton, Michigan. Born on July 5, 1936 in Newburgh, New York, he was the son of Hugh and Madeline (Gallet) Raymo. On February 20, 1960 he married Loretta Dumas in Fort Covington, NY. The couple relocated to Michigan in 1966. He was employed with Ford Motor Company as a Tool & Die maker until retiring in 1994. Maurice served in the U.S. Army from 1955 - 1958. He loved golfing, bowling and playing cards. He was preceded in death by his parents, infant son, Derek, sisters Sylvia Sutton and Rita Raymo. He is survived by his wife, Loretta Raymo; Children, Alicia and Lori Raymo, Rand and Tammy Raymo, Jeannine and Daniel Hulverson; Grandchildren, Benjamin Raymo, Abigail and Michael Hanks, Shelby and Benjamin Ziegler, Joseph Hulverson, Andrew Raymo, and William Raymo; Sister, Ruth and Gary Benware. A private memorial service will be held at a later date. In lieu of flowers, and for his love of Christmas, the family requests that you donate to: The Make A Wish Foundation at: https://wish.org

The family of Maurice B. Raymo created this Life Tributes page to make it easy to share your memories.

Maurice B. Raymo, age 83, of Carleton passed away on Wednesday,...

Send flowers to the Raymo family.