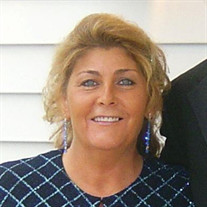 Marlene D. Carey, age 67, of Dearborn Heights, Michigan, passed away on Saturday, October 9, 2021 at Garden City Hospital, surrounded by her loving family. Born on September 16, 1954 in Detroit, Michigan, she was the daughter of Thomas and Beatrice (Gilman) Carey. She came from a large family of eleven children, which included ten girls and one boy. She was married to Mark Eric VanStone for over 45 years. She was employed with Sinbad's Restaurant, located in Detroit, MI, as a Cook for over 30 years. She was known for her love of shopping on QVC and loved giving a lot of what she bought to her sisters and nieces. Each of their homes hold many reflections of her generosity and love. She also loved baking and was untouched when it came to her peanut butter balls and fudge. Her favorite holiday was Christmas and she absoultely loved decorating her Christmas Tree. She was very particular in placing each ornament strategically on the tree and there was never a bare spot to be found! She also loved gardening. Knockout Roses and lillies were among her favorite flowers. Her greatest love of all, however, was taking care of her daughter and helping to raise her grandson. She also loved caring for and spoiling all of her furbabies. Marlene was preceded in death by her husband, Mark Eric VanStone, her mother, Beatrice Elaine Carey, her father, Thomas Joseph Carey, her sisters Diana Kruschinska, Barbara Gross, Debbie Savitskie, twin sister Darlene Franks, sister in law Loretta Carey, Nephews, Vern Gross and Joseph Savitskie, brothers in law, Larry Franks, Billy Franks, Norm Wesner and Blutchie Gross. She is survived by her daughter, Stacie Bratcher, son, Eric VanStone, grandson, Brenden Bratcher, her dog Cocoa, granddogs Max and Fiona, sister, Sherry Franks, brother, Tommy Carey, sister, Karen Wesner, sister, Brenda (Scott) Roberts, sister, Tammy (Mark) Bragg, sister, Tabby (Dave Hegwood) Carey, Brother-in-law, Jim Tousignant, God-daughter Ashley, 16 nieces and nephews, 28 great nieces and nephews and several great great nieces and nephews. At Marlene's request, no service's will be held. In lieu of flowers, contributions in her memory may be made to the Michigan Humane Society

Marlene D. Carey, age 67, of Dearborn Heights, Michigan, passed away on Saturday, October 9, 2021 at Garden City Hospital, surrounded by her loving family. Born on September 16, 1954 in Detroit, Michigan, she was the daughter of Thomas and Beatrice (Gilman)... View Obituary & Service Information

The family of Marlene D. Carey created this Life Tributes page to make it easy to share your memories.

Send flowers to the Carey family.