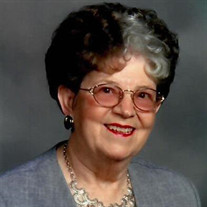 Marian M. (Southworth) Whiteaker, age 91, of Carleton, went home to be with her heavenly father on Tuesday, September 25, 2018. Born on March 20, 1927 in Carleton, Michigan, she was the daughter of Benjamin and Augusta (Winkleman) Southworth. On May 25, 1946 she married Darrell Whiteaker in Evangel Church, Carleton, MI. Marian was member of the Carleton United Methodist Church, sang in the Choir and was a Sunday School Teacher. She was a woman with varied interests. Past affiliations are Carleton VFW 4093, Neighborhood Garden Club and the Red Hat Society. She enjoyed dancing, camping, playing cards, working puzzles, crafts, gardening and in the past decorating cakes for special occasions like Weddings, Birthdays, Graduations, etc. She was preceded in death by her parents, husband, daughter Darlene, 7 brothers, Burdette, Floyd, Leroy, Claude, Wayne, Robert and Clayton. She is survived by her sons, James (Kathy) Whiteaker of Monroe, Ronald (Shelia) Whiteaker of Newport and Dale (Karen) Whiteaker of Coloma; daughter, Diana (Jerry Wilson) Chupudy of Adrian; 9 grandchildren, 10 great-grandchildren and 4 great great-grandchildren. Friends may visit in the Arthur Bobcean Funeral Home, Carleton Chapel on Friday, September 28, 2018 from 1:00 pm to 8:00 pm. Funeral Services will be held at Carleton United Methodist Church on Saturday, September 29, 2018 at 11:00 am. She will lie instate from 10 am until time of service. Rev. Taek Kim will officiate the service. Burial will be in Carleton Cemetery, Carleton, Michigan. In lieu of flowers contributions in her memory may be made to the Carleton United Methodist Church or Wellspring Lutheran Home.

Marian M. (Southworth) Whiteaker, age 91, of Carleton, went home to be with her heavenly father on Tuesday, September 25, 2018. Born on March 20, 1927 in Carleton, Michigan, she was the daughter of Benjamin and Augusta (Winkleman) Southworth.... View Obituary & Service Information

The family of Marian M. Whiteaker created this Life Tributes page to make it easy to share your memories.

Send flowers to the Whiteaker family.