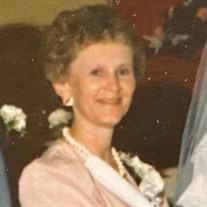 We are sad to announce that on April 7, 2020, we had to say goodbye to our Mother, Margaret Ann (Fix) Nusbaum of Flat Rock, Michigan. Margaret will be remembered as a loving wife, mother and grandmother. Margaret was a witty, talented, compassionate, giving, beautiful and intelligent woman. Margaret was born in Toledo, Ohio on May 20, 1935 to Charles and Helen (Zdybek) Fix. She spent her youth in Rossford, Ohio along with her two younger brothers, Richard and Charles. Margaret graduated from high school early and joined the Catholic convent as a novice. During her service to the church, she received a Bachelor's degree in Elementary Education from Bowling Green State University in Ohio and taught first grade for ten years. Margaret later left the convent to become a mother and wife. Approximately a year after leaving the convent, Margaret met and married David Nusbaum and moved to Flat Rock, Michigan where they raised their family. Together David and Margaret had three children: Janet, Phillip and Michael. Margaret worked as an elementary school teacher for many years and later substitute taught. She enjoyed teaching and would give gifts for every student on their birthdays. She later received a Master’s degree from Eastern Michigan University to further her teaching career. From a young age, Margaret played piano. She supported her local church by playing organ at mass and she also sang in various chorale groups with an alto voice. She was very active in the community which included: instructing aquatic exercise classes for senior citizens; selling Avon cosmetics for many years, visiting friends, going to movie theaters, shopping, baking, and gardening. She once planted red, white, and blue petunias in the shape of a flag for the bicentennial celebration. Margaret lovingly cared for many animals in her home including: rabbits, guinea pigs, the family dog (Scooter), birds, her cat and even skunks living under the front porch. Thank you to Gilda, Diana, Sue, Jackie, Eric, Sharon and all the amazing people who cared for her and helped in times of need. She is survived by her children and grandchildren: Janet (husband Bob, children Alexandria, Jackson and Henry); Phillip (wife Kelly, children Mitchell and Hollie); and Michael (wife Colleen, children Hannah and Molly); sibling Charles; and many in-laws, nieces, nephews, friends and family too numerous to list but not forgotten. Margaret is now reunited with her husband and partner of 40 years, David M. Nusbaum.

We are sad to announce that on April 7, 2020, we had to say goodbye to our Mother, Margaret Ann (Fix) Nusbaum of Flat Rock, Michigan. Margaret will be remembered as a loving wife, mother and grandmother. Margaret was a witty, talented, compassionate,... View Obituary & Service Information

The family of Margaret Nusbaum created this Life Tributes page to make it easy to share your memories.

Send flowers to the Nusbaum family.