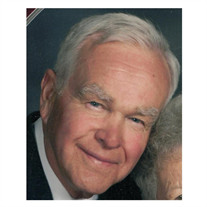 Louis W. Niemann, age 89, of New Boston, passed away on Saturday, November 20, 2021 at Henry Ford Hospital in Wyandotte, Michigan. Born on July 8, 1932 in Waltz, Michigan, he was the son of Louis and Clara (Dallman) Niemann. On July 9, 1955 he married Darlene Staschke in St. John's Lutheran, Waltz, MI. Louis served in the US Navy from 1952 - 1956. His family owned and operated Niemann Brothers Greenhouse, Waltz, MI for 89 years. He retired in 1994. Louis was a member of St. John's Lutheran Church and The Wheelmen, an Antique Bicycle club, for 50 years joining in 1971. He was an avid reader and loved to travel. During his youth he traveled with his parents, and by 18 years old he had seen the entire continental United States. For their 40th wedding anniversary they went to Hawaii. Louis was preceded in death by his parents and uncle Ted Niemann. He is survived by his wife Darlene M. Niemann,; sons Mark (Connie) Niemann and John Niemann; granddaughter Erika Niemann and sister Leona E. Niemann. Visitation will be held at Bobcean Funeral Home, Carleton Chapel on Tuesday, November 23, 2021 from 2:00 pm to 8:00 pm. Funeral Services will be held at St. John's Lutheran Church on Wednesday, November 24, 2021 at 11:00 am. Pastor Kyle Jones will officiate the service. Burial will be in Michigan Memorial Park Cemetery, Huron Township, Michigan. In lieu of flowers, contributions in his memory may be made to the American Diabetes Association, American Heart Association or St. John Lutheran Church, Waltz, MI.

The family of Louis W. Niemann created this Life Tributes page to make it easy to share your memories.

Send flowers to the Niemann family.