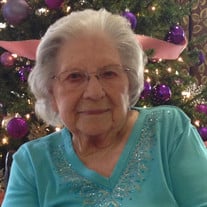 Lorraine E. Niemann, age 98, of New Boston, passed away on Monday, November 30, 2020 at Fountainview of Monroe. Born on April 28, 1922 in Monroe, she was the daughter of Herman and Minnie (Dingman) Kamin. On May 10, 1941 she married Werner "Vern" in St. John's Lutheran Church in Waltz, Michigan. She was employed with Booths Store as a clerk for years until retiring. Lorraine was a member of St. John's Lutheran Church;. She enjoyed bowling for 15 years, traveling and shopping. Lorraine was preceded in death by her parents, husband, son Kevin, sister Mina and brother Herman V. She is survived by her son, Gilbert (Jean) Niemann, 2 daughter, Dianne Kaiser, and Debra Niemann, 10 grandchildren, 13 great-grandchildren, 8 great great-grandchildren, brother, Kenny (Rose) Kamin and daughter in law Sarah Niemann. Funeral Services will be held at St. John Lutheran Church. She will lie instate Monday, December 7, 2020 at 11:00am until service at 12:00pm. Pastor Jeffrey Wade is officiating. Burial to follow after services. In lieu of flowers contributions in her memory may be made to the St. John's Lutheran Church General Fund.. Condolences @ www.bobceanfuneralhome.com

The family of Lorraine Niemann created this Life Tributes page to make it easy to share your memories.

Send flowers to the Niemann family.