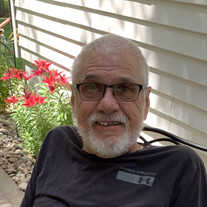 Lonnie D. Cox, age 65, of Franklin Township, Michigan passed away at his home on Wednesday, March 24, 2021 in Franklin Township, Michigan. Raised in New Boston, Michigan he later raised his family there before retiring to Franklin, Michigan. Born on April 26, 1955 in Trenton, Michigan, he was the son of Lonnie and Darlene (Skaggs) Cox. On June 2, 1973 he married Patricia Wright in First Baptist Church, Flat Rock. He was employed with Chrysler as a Chief Union Steward for 35 years until retiring in 2008. Lonnie was a member of UAW Local 372. Lonnie worked at the Chrysler Trenton Engine plant for 35 years, retiring in 2008. He was a hi-lo driver, then machine operator for 23 years, later becoming a Chief Union Steward for 12 years. He loved to spend time on his motorcycles, taking many trips with Patricia over the years. The most memorable rides were those where Lonnie and Patricia were able to spend time exploring the country, and the one-on-one time with each other. Never one to sit still, he spent most of his free time working in a garden, the garage, or on a car; wrenching on one thing or another. He was skilled in being able to build or fix anything. Give the man 3 toothpicks, a stick of gum, and a whisper of an idea and he’d have something built in no time! Generous with his time and resources, he was always first to show up with a helping hand, a game plan, and a smile. He would give the shirt off his back to help someone in need. Lonnie always knew what to say or do to get a smile and laugh going, and enjoyed sharing a laugh with others. Lonnie was loved by so many, making friends and lasting connections throughout his life. His kids always knew they had a cheerleader in the stands whether it was a sporting event or life event. Lonnie was a loving Papa who loved to see his granddaughters and share adventures. To know Lonnie, was to love Lonnie. He will be deeply missed by so many. Lonnie was preceded in death by his father, Lonnie Willard Cox. He is survived by his wife, Patricia Louise Cox of Franklin Township, MI, daughter, Kara (Brad) Celani, son, Chad Cox, mother, Darlene Cox, granddaughter, Maria Celani, granddaughter, Brianna Celani, sister, Brenda (Rodney) Poling, sister, Anita (Doug) Wilhelm, brother, John (Kim) Cox. Friends may visit at the Bobcean Funeral Home, Flat Rock Chapel on Friday, April 2, 2021 from 1:00 pm to 8:00 pm. A private Celebration of Life will be held at Bobcean Funeral Home on Saturday, April 3, 2021. Burial will be in Michigan Memorial Park Cemetery, Huron Township, Michigan. Lonnie regularly brought home stray animals, which thrilled Patricia to no end! If he saw a stray kitten, that kitten then had a new home with him! A kid at heart himself, he also regularly invested time in Toys for Tots. In lieu of flowers, contributions in his memory may be made to the Michigan Humane Society or Toys for Tots. Feel free to bring toys to the visitation, as there will be a box for collecting.

The family of Lonnie D. Cox created this Life Tributes page to make it easy to share your memories.

Send flowers to the Cox family.