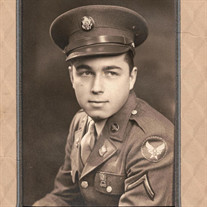 John (Jack) Reiser, age 96, died surrounded by family at home on May 17, 2021. John Reiser was born February 22, 1925 to Derwood and Leone (Mieden) Reiser in Carleton. He was married to Priscilla Pelton on March 15, 1947 at St. John’s Parish in Monroe. They made their home in Carleton. Jack served in the Army Airforce from 1943 to 1946. He was in the American and Asiatic Theater and was stationed in Alaska. After being discharged, he worked at Stinson’s, an airplane factory in Wayne, MI. He left there to work at the family business, C.H. Reiser & Sons Lumber, Co., in Carleton. He was a member and usher of St. Patrick’s Church and a life member of Carleton Post 4093 VFW. He was a member of Monroe Cloudbusters, a model airplane club and held a private license. Jack built many model airplanes that he was very proud of. He was also a member of the Carleton Volunteer Fire Department. Jack was preceded in death by his wife, Priscilla, his parents, 2 sisters Mary Durrant and Barbara Masserant, 2 brothers Jim and Dennis, and a grandson, John Bale. He is survived by his children Kay Ann Greca of Ypsilanti, Theresa (Terry) Bale of Carleton, Connie (John) Illes of Carleton, Annette (John) Becht of Redford, Maureen Reiser of Carleton, and Chris (Holly) Reiser of Monroe, 2 brothers Jerry and David of North Carolina, 8 grandchildren, and 13 great grandchildren, and 1 great, great grandchild. Cremation will take place. In lieu of flowers, contributions in his memory may be made to the St. Patrick School.

The family of John D Reiser created this Life Tributes page to make it easy to share your memories.

Send flowers to the Reiser family.