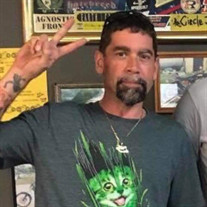 John C. Bale, age 49, of Carleton, passed away on Thursday, March 11, 2021 at ProMedica Regional Hospital in Monroe, Michigan. Born on July 30, 1971 in Monroe, Michigan, he was the son of Terry and Theresa (Reiser) Bale. On June 1, 1991 he married the love of his life, Denise McKesson at Bethany Baptist Church, Newport, MI. He was the owner of J&L Complete Painting, LLC. John belonged to "OZONE" Dirt Bike Competition Racing Team. He loved hunting and going up north to his parents cabin. John enjoyed riding his motorcycle, taking people for rides on his side by side and he was known for making moonshine. John was preceded in death by his grandparents, Charles and Katherine Bale and Priscilla Reiser. He is survived by his wife, Denise Bale; parents Terry and Theresa Bale; grandfather, John Reiser; children, Ashley Bale, BreeAnn (Sid) DeHaan and Tyler (Brooklyn Anderson) Bale; grandchild, Weston Hayes and brother, Jeff (Christy Collins) Bale. A memorial service will be held on Saturday, March 20, 2021 at 2:00 pm at George & LaRhonda Rote's Barn 463 Carleton Rockwood Rd., Carleton, MI 48117. Dress Casual. In lieu of flowers, contributions in his memory may be made to the Alpha-1 Foundation; Alpha1.org.

The family of John C. Bale created this Life Tributes page to make it easy to share your memories.

Send flowers to the Bale family.