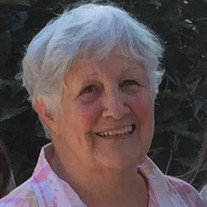 Joanne Blosser, age 83, of Monroe, Mi passed away on Sunday, January 27, 2019 at ProMedica Regional Hospital in Monroe, Michigan surrounded by her family who loved her dearly. Born on September 10, 1935 in Salineville, Ohio, she was the daughter of John and Jean (Kennedy) Needham. On July 16, 1955 she married Paul Blosser in Ohio and became mother to his son Paul Jay. Joanne was a member of St. Roch Catholic Church in Flat Rock Michigan. She was a homemaker and actively involved with the Flat Rock Athletic Boosters and Cub Scouts. She enjoyed reading and attending the sporting events of her children and grandchildren. Joanne was an avid Ohio State Buckeye fan, and cherished the time spent with her family and dog, Maggie. She is survived by her sons, John (Rhonda) Blosser of Flat Rock, Robert (Heather) Blosser of Flat Rock and Michael (Lynne) Blosser of Flat Rock; daughters, Lisa (Dr. Mark) Sherrard of Monroe and Lori (Daniel) Bondy of Carleton, daughter-in-law, Karen Blosser of South Rockwood. She was the oldest of 13 siblings and is survived by brothers James, John, Jeff, Joel and Jan; sisters Jennifer, Jackie, Jill, and Jeannette. She is also survived by 12 grandchildren, 4 step-grandchildren, and 4 great grandchildren. Joanne was preceded in death by her husband, son Paul Jay, parents, brothers Jerry Lee, Jody Kim, and sister Jeanne Kaye. Friends may visit in the Arthur Bobcean Funeral Home, Flat Rock Chapel on Friday, February 1, 2019 from 1:00 pm to 8:00 pm. Funeral Services will be held at St. Mary's Catholic Church in Rockwood on Saturday, February 2, 2019 at 11:00 am. She will lie instate from 10:30 am until time of service. Father James Rafferty will officiate the service. Cremation is to follow. In lieu of flowers contributions in her memory may be made to the American Cancer Society or to Susan G. Komen https://ww5.komen.org

Joanne Blosser, age 83, of Monroe, Mi passed away on Sunday, January 27, 2019 at ProMedica Regional Hospital in Monroe, Michigan surrounded by her family who loved her dearly. Born on September 10, 1935 in Salineville, Ohio, she was the daughter... View Obituary & Service Information

The family of Joanne Blosser created this Life Tributes page to make it easy to share your memories.

Send flowers to the Blosser family.