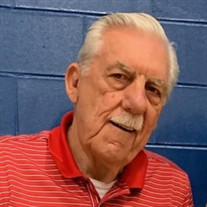 James A. Stewart, age 87, of Southgate, passed away on Wednesday, November 10, 2021 in the comfort of his home. Born on June 24, 1934 in Monroe, Michigan, he was the son of Arlo and Theresa (Larabelle) Stewart. On January 6, 1968 he married Gail M. Falkey in Monroe, Michigan. He was employed with General Motors as a Maintenance Supervisor for 35 years until retiring in 1993. He also worked for the Westcott Mail Boat on the Detroit River, and spent time working on ore carriers when he was younger. James was a member of the Woodcarver's Group in Saline and UAW Local 1976. During his free time he enjoyed woodworking, reading, listening to music, playing the guitar, prided himself in challenging MENSA work, and had a great interest in boats, lighthouses, and Michigan’s Great Lakes. James was preceded in death by his parents, grandchildren Melissa Stewart and Adam J. Ruffin; brother Harold Stewart; sisters Barbara Rundell and Bernice Stewart. He is survived by his wife Gail M. Stewart; son Christopher (Angela); son Glenn; daughter Megan (Erin McClellan) Stewart; grandchildren Sarah Stewart, Elijah Stewart, Lena Stewart, Ian Stewart, Zachary Stewart, and Liam McClellan; sisters Rose Schmidt and Paulette (Steven) Wakeley. Visitation will be held at Bobcean Funeral Home, Carleton Chapel on Sunday, November 14, 2021 from 2:00 pm to 8:00 pm. Funeral Services will be held at St. John's Lutheran Church on Monday, November 15, 2021 at 10:00 am. He will lie instate from 9:00 am until time of service. Rev. Kyle E. Jones will officiate the service. Cremation will follow. In lieu of flowers, contributions in his memory may be made to the Goodfellows Organization. detroitgoodfellows.org

The family of James A. Stewart created this Life Tributes page to make it easy to share your memories.

James A. Stewart, age 87, of Southgate, passed away on Wednesday,...

Send flowers to the Stewart family.