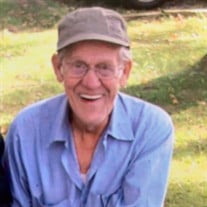 James (Jim) R. Ames Sr., age 86, of Brownstown, passed away on Friday, April 16, 2021 in the comfort of his home surrounded by his family. Born on May 2, 1934 in Adams County Ohio, he was the son of Charles and Inez (Bellamy) Ames. On December 3, 1955 he married Edna White in Trenton, MI. Jim was employed for over twenty years at BASF-Wyandotte Chemicals, in Wyandotte Michigan, until the plant suddenly closed, leaving countless long time employees out of work. He recovered from the sudden job loss by moving his family to Litchfield, Michigan to continue his career as a boiler operator for the next three years. A craftsman in his field, he drew upon his previous experience to educate plant personnel of all ranks in proper power plant operation. Eventually, he returned to the Downriver area where he worked at the Ford Rouge powerhouse until retirement. Jim enjoyed hunting and fishing with his family and friends. He was known to tell long stories of his childhood growing up in Ohio, and often would be laughing so hard he would have a tough time finishing the story. People were naturally attracted to him, and he was rarely without an audience requesting that he share a story. Within minutes he could capture the attention of a full room as he shared a life experience or an opinion on a subject. In the Downriver area, numerous cars, trucks, boats, lawnmowers, snowblowers, weedwhackers, and generators were brought back to operating condition by his mechanical aptitude. He could be found in his garage, at almost any time of the day or night, helping somebody out with a machine that wasn’t working properly. He would spend a few minutes diagnosing the problem and then with a quick “Oh shit, here is your problem”, he would explain to the machine owner what needed to be corrected. The repair would be completed and the machine would be operational again. In a time where opinions are squashed as not being politically or socially correct, Jim brought a breath of fresh air in his honest and straightforward opinions on any subject. He did not pull punches or use bias in his dialogue. Instead, he simply shared what he thought on the discussion topic. This type of unbiased honesty caused numerous people to seek out his opinion, even if they knew they may not like the result. There was a natural magnetic draw to him and it caused friends and family to love him dearly. As an example of his effect on people that came in contact with him, he had a physical therapist assist him with his strength, after recovering from a hip injury. Even though his therapy had been completed for more than a month, the therapist contacted Jim’s family to ask if it was OK to visit him on occasion. The therapist was simply enamored with Jim and his personality. Jim was preceded in death by his parents, his daughter, Sonja Jean Perrow, and 15 siblings. He is survived by his wife, Edna Mae Ames; children Helen (Jim) Diroff, Joe Ames, and James (Tammy) Ames Jr.; brothers, Roy (Nancy) Ames and John (Mary) Ames; 9 grandchildren and 11 great-grandchildren. Friends may visit in the Bobcean Funeral Home, Flat Rock Chapel on Monday, April 19, 2021 from 2:00 pm to 7:00 pm. Funeral Services will be held at Bobcean Funeral Home on Tuesday, April 20, 2021 at 11:00 am. Burial will be in Michigan Memorial Park Cemetery, Huron Township, Michigan. In lieu of flowers, contributions in his memory may be made to the St. Jude Hospital for Children.

James (Jim) R. Ames Sr., age 86, of Brownstown, passed away on Friday, April 16, 2021 in the comfort of his home surrounded by his family. Born on May 2, 1934 in Adams County Ohio, he was the son of Charles and Inez (Bellamy) Ames. On December... View Obituary & Service Information

The family of James R. Ames Sr. created this Life Tributes page to make it easy to share your memories.

Send flowers to the Ames family.