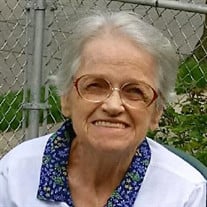 Helen E. LeBlanc, age 82, of Wyandotte, formerly of Flat Rock, passed away on Wednesday, June 27, 2018, at Henry Ford Hospital in Wyandotte, Michigan. Born on October 16, 1935, in Flat Rock, Michigan, she was the daughter of Harry and Marie (Hehl) Vaughen. On June 17, 1961, she married Noah A. C. LeBlanc at the First Congregational Church of Flat Rock. Helen was a 1954 graduate of Flat Rock High School with her twin brother Robert Vaughen. Her life was inspired by her creative spirit. She excelled in the fine arts and teaching. Helen’s greatest gift was her visionary instincts, and adeptness to translate those ideas with her hands, allowing her to create images of beauty and form that were admired and bestowed with numerous awards. She was a member of the Downriver Arts and Crafts Guild and the Michigan Watercolor Society. When she was not teaching, she enjoyed gardening, collecting books and honing her skills in other art forms such as china painting, rug hooking, and quilting. She was employed as an Art Teacher for Roosevelt High School, Wyandotte WMCA, Woodhaven Summer Enrichment Program, and the Creative Arts Gallery for many years until retiring. She then taught students of all ages at her home studio. Helen was preceded in death by her parents, husband, her sister Esther and Brother-in-Law Edward Johnson, her sister Luella and Brother-in-Law Hoss Pennington, Brother-in-Law Phillip Atwater, and Grandson Timothy LeBlanc. She is survived by her sons, Dana (Sharon) LeBlanc of Mio, MI and Michael (Marlena) LeBlanc of Conway, AR, brothers, Robert (Marge) Vaughen of Howell, MI, Myron (Sue) Vaughen of Lancaster, PA and sister, Carol Atwater of Waterford, MI. Granddaughters Amber (Teryn) LeBlanc of Conway, AR and Selby LeBlanc of Davenport, IA; Great Granddaughter Memphis LeBlanc-Lance of Conway, AR.| Funeral Services will be held at Arthur Bobcean Funeral Home on Friday, June 29, 2018, at 11:00 am. Visitation will be held from 9:00 am until the service begins at 11:00 am. Rev. James Williams will officiate the service. Burial will be in Pleasant View Cemetery, Petersburg, Michigan.

Helen E. LeBlanc, age 82, of Wyandotte, formerly of Flat Rock, passed away on Wednesday, June 27, 2018, at Henry Ford Hospital in Wyandotte, Michigan. Born on October 16, 1935, in Flat Rock, Michigan, she was the daughter of Harry and Marie... View Obituary & Service Information

The family of Helen E. LeBlanc created this Life Tributes page to make it easy to share your memories.

Send flowers to the LeBlanc family.