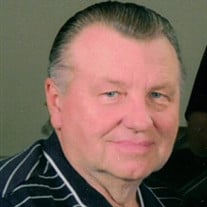 Gregory Lee Headley, age 73, of Carleton, Michigan passed away on Sunday, July 11, 2021 in Monroe. Born on February 12, 1948 in Monroe, he was the son of Everett and Clara (Thorn) Headley. On June 10, 1967 he married JoAnn Anderson in Allen Park. Gregory served as a Sergeant in the United States Air Force from 1967-1971. He became a self-employed Professional Residential Painter for 30 years until retiring in 2009. Gregory was a member of the VFW post 4093 in Carleton. He was proud to have served his country and the work he did to assist other veterans in their times of need. He was 1 of 1441 people who took part in a 40 year diabetes study with the National Institute of Health. Being part of the study since its inception, he was given the first designed version of the insulin pump. Through his struggle with diabetes, Greg found a way to make a positive difference partly by being active in numerous fundraisers for the American Diabetes Association. Greg and JoAnn were also active in helping with the fundraising efforts of the Flat Rock Business Association. He loved to spend time gardening and enjoying the outdoors. Gregory was known by his family for taking them on numerous adventures throughout their lives. The memories made were deeply treasured by him. Most of all, Gregory loved his family and was a proud husband, father and grandfather. Gregory was preceded in death by his parents. He is survived by his wife, JoAnn Headley, son, Matthew (Julie) Headley, and his grandchildren, Morgan, Hailee, Gunner, and Cooper. Visitation will be held at Bobcean Funeral Home, Flat Rock Chapel on Monday, July 19, 2021 from 9:30 am to 12:00 pm. Funeral Services will be held at on Monday, July 19, 2021 at 12:00 p.m. Pastor Jeffery Wade will officiate the service. A private burial will take place at Great Lakes National Cemetery, Holly, Michigan at a later date. In lieu of flowers, contributions in his memory may be made to the American Diabetes Association.

The family of Gregory L. Headley created this Life Tributes page to make it easy to share your memories.

Send flowers to the Headley family.