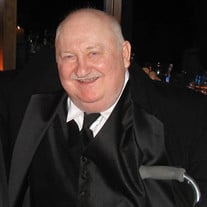 If you question whether you ever met Grant, then you likely never did. The favorite dad to many, including his own children, he had a gift for telling stories that may even be true and a knack for creating memories with his “L’Chayim” (to life!) philosophy. It is with deep sadness that we share that he passed away peacefully on Sunday, November 29th. Grant was born on July 11, 1937 to Joe and Marion (Grant) and raised in Worcester, MA along with his siblings, Connie (Smith), Alice (Cosner), and Mike, until a judge strongly hinted he should join the Air Force. Afterwards, he played baseball at Worcester Junior College before transferring to Michigan State. Although he struck out during his walk-on tryout, he hit a home run when he met Nancy Lee, the smartest and prettiest girl on campus, whom he promptly married after graduating with a B.A. in accounting and, simultaneously, a G.E.D. His first CPA job was with Peat Marwick in Detroit, then R.I., but he really hit his stride in 1967 as the finance director for the first full-time Black mayor in the nation, Bob Blackwell, in Highland Park, MI, a time he looked back upon fondly. He held similar positions in Taylor, and later, Gibraltar, where he last resided. If you are one of those who asked him to fix your parking ticket, he never did, he paid it for you. See donations below. “You can say a lot of things about your father,” said Nancy, “but he’s not boring.” From deciding to buy "The Big A" for Nancy to have a place on which to ride her horse, to sneaking his daughter out of school for a baseball game, to dumping a towering pile of topsoil in the backyard for his future civil engineer son, to driving through the night with a nephew and his youngest son to a Stanley Cup game after being told “we’ll never get in”, everyone's memories confirm the same. Grant had a passion for baseball (Red Sox), keeping kids off the streets (baseball coaching and Boys & Girls Club) and Michigan State (anything). He was a devoted Catholic throughout. He celebrated 50 (now 57) years of marriage to Nancy at MSU's chapel with each of his children, Donna, Joe, and Ed and their spouses, Drew Peel, Diane (Stephan), and Tiffany (Mills). His grandchildren, Michael and David; Marisa and Lauren; and Stephen, Jennifer, and Grant, have been an ongoing source of joy, laughs and passengers on many of his spontaneous adventures as well as recipients of requests for ice water “while you’re up.” All are Spartan fans. A private funeral service will be held. Donations in lieu of flowers may be sent to the Fauver-Martin Club in Highland Park (aka Boys & Girls Club), the Detroit Goodfellows (Old Newsboys’ “no child without a Christmas”), or the Spartan Marching Band. Fauver-Martin Club (Mark donations for Fauver-Martin Club) 24 Ferris Street Highland Park, MI 48203 2912 Phone: 313-868-8450

If you question whether you ever met Grant, then you likely never did. The favorite dad to many, including his own children, he had a gift for telling stories that may even be true and a knack for creating memories with his &#8220;L&#8217;Chayim&#8221;... View Obituary & Service Information

The family of Grant Alberts created this Life Tributes page to make it easy to share your memories.

If you question whether you ever met Grant, then you likely never...

Send flowers to the Alberts family.