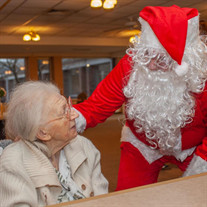 A Memorial Mass will be held on Friday August 7, 2020 10:30 AM with visitation beginning at 9:30 am at Our Lady of Loretto Catholic Church 17116 Olympia Redford, MI 48240 313-534-9000. In lieu of flowers please make a donation to Our Lady of Loretto Catholic Church. Affectionately referred to as Grandma Gladys, our beloved mother/grandmother passed away 7/1/2020 at age 98. Born 6/3/1922 in Washington, PA. Survived by son Joseph (Colleen) and grandchildren Katherine and Nicholas. Divorced from Jozsef Virag (dec). Her siblings are Kazimir(dec), Edith(dec), Emil(dec), Mary(dec), Mietek(dec) and Elanora(dec). Her parents are Walter (dec) and Julia(dec). Grandma Gladys was the last surviving member of her immediate family. Grandma Gladys grew up in the very house where the family bottled Nehi soda. The front of the house was a storefront and the family lived in back and upstairs. The house she grew up in was right across the street from a steel mill. Gladys had bad teeth, and she always blamed the soda from growing up! Grandma graduated from Trinity HS and later left her home of Washington, PA for a teaching career in Detroit, MI. She would later meet and marry Jozsef Virag, a legal alien, who escaped Hungary during the 1956 revolution. Unfortunately, they would later divorce. Together they had Joseph Virag, their only child. Grandma Gladys led an accomplished life full of travel. Not content to stay at home, her job as a schoolteacher in Detroit allowed ample opportunity for summer travel, and she took great advantage! In 1955-1956 she spent a sabbatical year in Europe, studying French at the Sorbonne in Paris, France and German at the Goethe Institut near Munich, Germany. She previously attended French Summer School at McGill Univ in Montreal, PQ Canada. She’s been to Poland (her heritage) dozens of times over the years! One time, she traveled to Europe with Mary, her older sister and got caught in an unintended adventure. Mary got ill and required medical attention. They were in London, England at the time and Mary went into hospital. Mary was released after a couple weeks and they returned home. Another time Grandma Gladys took her son Joe to Europe in 1970 and they were on a train destined to Prague, Czechoslovakia. Unfortunately, they had the wrong visas and they were turned away at the border. On that same trip they met Cardinal Karol Wojtyla at the Roman Catholic Cathedral in Krakow, Poland. It was a special moment to meet Cardinal Wojtyla, who would later become Pope John Paul II! Related to travel, Grandma had a particular interest in figuring out the accent of those she met. When meeting an immigrant for the first time, she was not bashful about asking their country of birth. Further, if she knew any of the language she’d carry on in that language! Every. Time. Grandma held much closeness to her Polish heritage. She wore traditional Polish costumes and learned Polish folk dance. She folk danced Friday nights at the International Institute. She loved being of Polish heritage and wore it on her sleeve. To demonstrate her love of Polish culture, she had affiliations with Friends of Polish Art, polish National Alliance, and the Filarets Choir. Music was one of her passions. Piano in particular. She taught music at old Webster and Pattengill Schools and graduated from Northwestern University with a degree in Music. Before transferring to Northwestern Univ, she attended Duquesne Univ in Pittsburgh, PA. In later years she sang in the St. Andrew Choir. As a schoolteacher, she taught for a total of 39 years, which includes 4th grade at Newberry, Jeffries and Logan Schools in Detroit, MI. Growing up with a schoolteacher has its challenges. Joe remembers how much Gladys made him write over and over sentences and letters, until his penmanship was on par or better than his grade level! Joe also remembers going to see her classroom. She had plenty of dinosaur figures, American Indian figures and other figures. They were fun to look at! After retirement as schoolteacher, Grandma Gladys was an active dealer of Madame Alexander dolls, Barbie dolls, Polish craft items, jewelry, and flea market finds. Hardly a weekend went by that she didn’t have a show where she had a booth. She was affiliated with the Barbie Doll Collectors Club and occasionally attended their annual convention. Katie remembers when as a youngster Joe took her to Grandma Gladys’ house when he mowed her lawn. Grandma would bring bags of items out from her house and proudly show Katie all the contents. Katie would come home with some good finds! Anytime any of Joseph’s family went outside, they had to dress WARM! She would say “Do you have a jacket?”, followed by “Is it warm enough?”, and then the big question – “Do you have boots?” Every. Time. The. Same. She made sure we were properly dressed, from head to toe! As with most her age, television was the main source of entertainment. Grandma Gladys had a particular interest in Wheel of Fortune and Jeopardy. So much, that when one of us called during this one-hour period, she would say “I’m watching Wheel of Fortune (or Jeopardy), can I call you back?”. When Grandma moved out of her home in 2015 and into assisted living, she made many friends of the staff and other residents. She will be missed. To live a life so full and varied may be rare, but to combine with such a long life is a blessing! We’re so grateful for the time we spent with Grandma Gladys! Many prayers were said for her entry into the Lord’s house. We know those prayers will be answered.

The family of Gladys Virag created this Life Tributes page to make it easy to share your memories.

Send flowers to the Virag family.