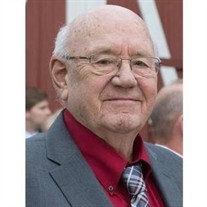 Gerald Arthur Miller, age 82, of New Boston, Michigan passed away on Wednesday, September 1, 2021 in Monroe, Michigan. Born on October 16, 1938 in Huron Township, Michigan, he was the son of Harold and Arline (Erbel) Miller. He graduated in 1956 from Huron High School, but moved to Aberdeen, South Dakota where he met and married the love of his life, Susan Johnson, on September 25, 1957. He retired as a Superintendent from Guardian Glass in 1995, after 24 years. Gerald was a member of St. John's Lutheran Church in Waltz. A kind, hardworking man with a warm smile who was devoted to his family and his faith. He was happiest when he was able to spend time with his grandchildren, gardening, and doing his daily crossword puzzles while he watched sports of all kinds. He never missed a birthday, anniversary, or Christmas card. Gerald was preceded in death by his wife, Susan Miller, son, Russell Miller, brother, Kent Miller, father, Harold Miller, and mother, Arline Campbell (Miller). He is survived by his daughters, Christine (James) Okler and Kathi (Thomas) Parker Jr; son, Jay (Stacy) Miller; daughter-in-law, Donna Miller; grandson, Lee Booth, grandson, Jerry Okler, granddaughter, Jamey (Dan) Tackett, grandson Thomas (Marci) Parker III, grandson Peter Parker, grandson Joel (Mackenna) Parker, granddaughter Alexandra (Tim) Holden, grandson Jason (Christina) Miller; four great-grandchildren and another on the way; sister-in-law, Judy Cvetezar and niece, Jodi Cvetezar. He will be deeply missed by many family and friends. Visitation will be held at Bobcean Funeral Home, Flat Rock Chapel on Tuesday, September 7, 2021 from 2:00 pm to 8:00 pm. Funeral Services will be held at St. John's Lutheran Church, Waltz on Wednesday, September 8, 2021 at 10:00 am. Rev. Jeffrey E. Wade will officiate the service. Burial will be in Michigan Memorial Park Cemetery, Huron Township, Michigan. Contributions in his memory may be made to the St. John's Lutheran Church and St. Louis Center in Chelsea.

Gerald Arthur Miller, age 82, of New Boston, Michigan passed away on Wednesday, September 1, 2021 in Monroe, Michigan. Born on October 16, 1938 in Huron Township, Michigan, he was the son of Harold and Arline (Erbel) Miller. He graduated in... View Obituary & Service Information

The family of Gerald A. Miller created this Life Tributes page to make it easy to share your memories.

Send flowers to the Miller family.