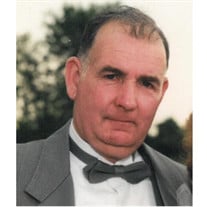 George S. Messmore, age 91, former resident of Berlin Township, went to be with the Lord on Tuesday, March 29, 2022. He was born on a farm in Shelby Township, Indiana on September 14, 1930. One of 8 children born in the union of Virgil and Bessie (Catron) Messmore. He attended Morristown High School in Indiana, the only one in his farming family to graduate from high school. He fell in love and married the love of his life, Jane (Reed) Messmore on August 26, 1952 while on leave from the Army, where he served faithfully as a Sergeant in the Korean War 1950 - 1953. George was a hard, determined and dedicated worker, who put in timeless hours to provide for his wife and 7 children, sometimes working 2 jobs. He believed in hard work and the lessons learned from earning what you have. He worked as a conductor for DT & I Railroad for many, many years, also a landscaper in his younger days. Over the years he took his family on vacation every year to almost every state in the country and some traveling overseas until the death of his loving wife, Jane on May 11, 1999. He always enjoyed a good cup of coffee at his local McDonald’s, the Flat Rock Donut Shop and a few other special places to meet with his friends, war movies on TV and talking about the good old days. He was a member of St. Roch Catholic Church in Flat Rock and attended regularly until his health declined, went into hospice care and he moved in with his youngest daughter, Anne and her husband Robbie. He was preceded in death by his parents, Virgil and Bessie Messmore, all of his brothers and sisters, Virginia, Cyrus, Elbert, Betty, Wray, Herman and Emil. His beloved wife, Jane and their two sons, Patrick and Daniel Messmore. To cherish his memory, he leaves his five remaining children, Susan (the late Terry Farrar), Michael (Carla) Messmore, Elizabeth (Chuck) Roberts, Anne Harmon (Robbie Snelson), Raymond (Joyce) Messmore, numerous grandchildren, great grandchildren, step grandchildren, step great grandchildren, and many nieces and nephews. Visitation will be held at Bobcean Funeral Home, Flat Rock Chapel on Thursday, March 31, 2022 from 2:00 pm to 8:00 pm. Funeral Services will be held at St. Roch Catholic Church on Friday, April 1, 2022 at 11:00 am. Father Bob Johnson will officiate the service. His final resting place is Michigan Memorial Cemetery next to his loving wife of 46 years, shy 3 months of their 47th Wedding Anniversary.

George S. Messmore, age 91, former resident of Berlin Township, went to be with the Lord on Tuesday, March 29, 2022. He was born on a farm in Shelby Township, Indiana on September 14, 1930. One of 8 children born in the union of Virgil and... View Obituary & Service Information

The family of George S. Messmore created this Life Tributes page to make it easy to share your memories.

Send flowers to the Messmore family.