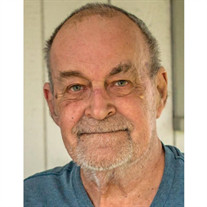 George Carl Luckwald, Jr. (1944-2020) George Carl Luckwald Jr., 76, of Garden City, Michigan, passed away on December 2nd due to complications from COVID-19. As a young man, George graduated from Bentley High School and served as an airplane mechanic in the Air Force Reserve before beginning a 30 year career delivering mail for the US Postal Service. After retiring from the post office, he worked part-time at a local hardware store. He was a master woodworker, a walking encyclopedia of classic cars, and the first to solve any Wheel of Fortune puzzle. He loved building things around the house, playing billiards, fishing, singing along to Roy Orbison on car rides, feeding peanuts to the local squirrels, following the Detroit Tigers, and being outdoors in the sun with the daily crossword. He was preceded in death by his wife of 48 years, Shirley, who passed away in 2015. He is survived by his sister, Jan Pierce; his sons, Alan and Eric, and their spouses, Monica and Ranjani (resp.); and 6 grandchildren, Noah, Eleana, Grace, Robert, Audrey, and Maci. Because of the pandemic, there will be no public funeral service at this time. In remembrance of George’s life, the family asks that any charitable donations be made to either Community Lutheran Church in Flat Rock, MI, or to a local food bank of the donor’s choosing. A private visitation will be held Sunday, 11am to 12pm. Public viewing 12pm to 2pm, at Bobcean Funeral Home, Flat Rock Chapel. Due to the Emergency Order, 25 people are allowed, at one time, on a rotation basis. The family will have a private funeral service beginning at 2pm.

The family of George Luckwald Jr created this Life Tributes page to make it easy to share your memories.

Send flowers to the Luckwald family.