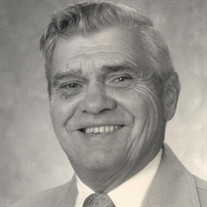 Frederick Alvin Kleinow, age 92, of Exeter Township, passed away at St. Mary's Hospital, Livonia, on Tuesday, April 14, 2020. Our family lost our beloved Fred, one who brought such "joy" to the family. He was the first son of the union of George Sr. and Della (Gilstorff) Kleinow. Frederick Alvin Kleinow was born on January 18, 1928 in Romulus, Michigan. Like his father, Fred dreamed of becoming a farmer, but due to a childhood ailment, plans changed. During his time of healing, Fred became a beautiful painter, and developed a love of trains, making his own model railroad. After graduation from Airport High School in 1949, he took a job at Hurd Sterling in Flat Rock, which became Huron Valley Oil. He retired from there in 1992, working 41 years. During this time he met "Jean Hayward", his dear companion for over 40 years, she survives him. They were members of the Michigan Railroad Club, and traveled all over. Growing up in times when thrashing was done and grain was cut with horses, Fred collected, restored and worked many "John Deere" tractors, along with a favorite "Frick Steam engine". He was a member of the Two-Cylinder Club of Michigan. He enjoyed gardening, always taking pictures & movies of family and spending time "Up North" at the cabin with his brother Harold & family. His passing was preceded by his sister Pearl Kleinow, his parents and a sister-in-law, Julie Kleinow. To cherish his memory, Fred leaves two dear brothers George Kleinow and Harold Kleinow, both of Carleton; his nephews and nieces; John (Brenda) Kleinow of Petersburg, Rick (Ruth) Kleinow of Monroe, Teresa (Duane) Cain of Belleville. Daniel (Lori) Kleinow of Carleton, Roxanne (Tim) Ellis of Monroe, Julie (Scotty) Kleinow of Monroe, Scott (Ann) Kleinow of Carleton, Cora LaRoy of Milan, and many great nieces and nephews. There will be a private family gathering prior to burial at Michigan Memorial Park Cemetery. The family requests any memorials in Fred's name be made to the Nurses Association or the Red Cross. Online condolences and special memories may be made through www.bobceanfuneralhome.com

Frederick Alvin Kleinow, age 92, of Exeter Township, passed away at St. Mary's Hospital, Livonia, on Tuesday, April 14, 2020. Our family lost our beloved Fred, one who brought such "joy" to the family. He was the first son of the union of George... View Obituary & Service Information

The family of Frederick A. Kleinow created this Life Tributes page to make it easy to share your memories.

Send flowers to the Kleinow family.