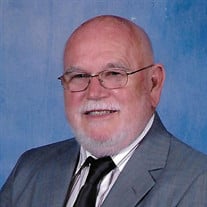 Franklin D. Adkins, age 78, of Palm Bay, FL formerly of Waltz, MI passed away on Monday, September 30, 2019 at Ascension Borgess Hospital in Kalamazoo, Michigan. Born on June 24, 1941 in Owsley, Kentucky, he was the son of Samie and Ivy (Allen)... View Obituary & Service Information

The family of Franklin D. Adkins created this Life Tributes page to make it easy to share your memories.

Send flowers to the Adkins family.