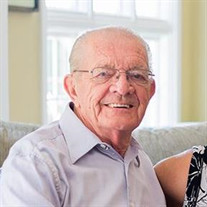 Frank R. Matusik, age 76, of South Rockwood, passed away on Sunday, December 27, 2020 at ProMedica Regional Hospital in Monroe, Michigan. Born on December 16, 1944 in Gaylord, Michigan, he was the son of Jacob and Joanna (Koronka) Matusik. On October 15, 1966 he married Marilyn Manor at Hosanna Tabor Lutheran Church, Redford, MI. Frank was a Veteran of the U.S. Navy. He was employed with Ford Motor Company as a Machine Repair mechanic for 37 years until retiring in 2001. Frank was a member of St. John's Lutheran Church. He also was a member of the S. Rockwood Fire Department for 15 years, where he earned the rank of "Chief". He coached S. Rockwood summer baseball and softball for at least 12 years. Frank loved hunting, fishing, casinos, vacationing and gardening. A precious time for him was spending time with his family celebrating all the life milestones and birthdays. He was preceded in death by his parents and brothers, James and Jerome. He is survived by his wife, Marilyn Matusik; children, Sandra (Edward) Blair, Mark Matusik and Scott Matusik; 10 grandchildren and 2 great-grandchildren; brother, Donald (Sandie) Matusik, sisters, Lorraine Bolam and Gloria Lauzon; sister in law, Gwendolyn Matusik. Friends may visit in the St. John's Lutheran Church, Waltz Chapel on Saturday, January 2, 2021 from 10:00 am to 11:00 am. Funeral Services will be held at St. John's Lutheran Church on Saturday, January 2, 2021 at 11:00 am. Rev. Jeffrey E. Wade will officiate the service. Burial will be in Glen Eden Memorial Park, Livonia, Michigan. In lieu of flowers, contributions in his memory may be made to the St. John Lutheran Church or St. Jude Children's Research Hospital.

Frank R. Matusik, age 76, of South Rockwood, passed away on Sunday, December 27, 2020 at ProMedica Regional Hospital in Monroe, Michigan. Born on December 16, 1944 in Gaylord, Michigan, he was the son of Jacob and Joanna (Koronka) Matusik.... View Obituary & Service Information

The family of Frank R. Matusik created this Life Tributes page to make it easy to share your memories.

Send flowers to the Matusik family.