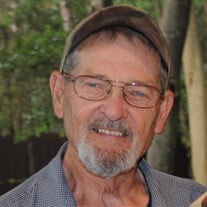 Francis Ronald Beausejour, age 81, of Belleville, passed away on Saturday, September 26th, 2020, at his home after battling Lewy Body Dementia and Non-Hodgkin’s Lymphoma. Our hearts are broken but we are at peace knowing he is in the arms of our Lord and Savior Jesus Christ. Francis was born in Ecorse to the late Herman and Nellie (Baker) Beausejour on February 28th, 1939. He served in the United States Army from 1956-1958, stationed at Fort McArthur, California. After his service, Francis worked as a structural steel welder at Whitehead & Kales, overhead crane operator at Great Lakes Steel and Ford Motor Company. His love of boats led him to complete training and receive certification on outboard motors to work at area marinas. Before retirement, Francis worked as a maintenance technician/manager for property management companies. Francis married Sandra Droulliard and from this union he was blessed with two sons. On July 7th, 1990, Francis married Susan Fischer at St. John’s Lutheran Church in Waltz. From this union he was blessed with two step-daughters. In his younger years, he was part of a competitive archery league and a downriver figure skating club, participating in ice shows. Francis shared his love of boating with his family. He also loved hunting, camping, fishing, playing Euchre, woodworking, dancing and listening to music. Most of all, Francis cherished his family and loved spending time with them. Francis had a great sense of humor, was good-hearted and would do anything for his family. To cherish his memory, Francis leaves his beloved wife of 30 years, Susan; a son, Gary Beausejour of Lincoln Park; a daughter-in-law, Tonya (Ronnie) Beausejour of Wyandotte; step-daughters, Heather (Peter) Grimley of Milan and Angela (Shawn) Fitzgerald of Belleville; his eleven grandchildren: Mark Truskolaski, Ashley Beausejour, Jeremy Zapawa, Connor and Cody Beausejour, Alexis Newhouse, Maya and Lila Grimley, Emma, Ava and Liam Fitzgerald; three great-grandchildren, Michael, Elizabeth and Jacob Truskolaski; a sister, Gail Fodo of Wyandotte and many nieces and nephews. In addition to his parents, Francis was preceded in death by his son, Francis Ronald Beausejour II; two brothers, Richard and Gary Michael, and three sisters, Lois Kowalski, Shirley Meade and Janet Titus. Family and friends may visit from 5p.m. to 8 p.m. Wednesday, September 30th at Bobcean Funeral Home in Flat Rock. Francis will lie in state at 10 a.m. Thursday, October 1st at St. John’s Lutheran Church in Waltz until services at 11am. Rev. Kyle Jones will officiate. Burial will follow at Hillside Cemetery, Belleville, MI. Out of consideration for all attendees' health and safety, masks will be required as will social distancing. Memorials in Francis’ name can be made to St. John’s Lutheran Church.

Francis Ronald Beausejour, age 81, of Belleville, passed away on Saturday, September 26th, 2020, at his home after battling Lewy Body Dementia and Non-Hodgkin&#8217;s Lymphoma. Our hearts are broken but we are at peace knowing he is in the arms... View Obituary & Service Information

The family of Francis Ronald Beausejour created this Life Tributes page to make it easy to share your memories.

Send flowers to the Beausejour family.