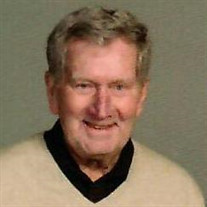 Donald E. Hunter, age 88, of Flat Rock, passed away on Sunday, June 16, 2019 in the comfort of his home. Born on February 26, 1931 at home in Brownstown, Michigan, he was the son of David Oren and Gladys (McCalla) Hunter. He graduated in 1949 from Trenton High School and joined the Airforce where he served in Mississippi for 13 months. After returning home he started work at Monaghan Bronze in Flat Rock where he met his future wife. He married his sweet-heart, Marilyn Barnes on September 22, 1951. They were married 66 years when she passed away September 9, 2017. He worked for 37 years for Mobil Oil Corp at different levels through his career, ending as a executive salesman. He played sports through his life whether it was for work or church. During that same time period he started a local recreation association, Fort & Allen Recreation, on property his father donated. He was also a boy scout leader in the area for years. Brownstown Planning commission was another part of his life he enjoyed. Outside of his secular career he drew the plans and participated in building 6 houses for family members. He was very active in the Flat Rock First United Methodist Church being involved in several church committees as well as church sports and singing in the choir. Later in his life he could be seen happily cutting grass on his tractor, playing golf, fixing things at his own home or asking others what he could fix for them. His family and extended family was important to him as well. He was happy to plan family reunions and having picnics. His grandchildren and great grandchildren brought great joy to his life. He was preceded in death by his parents, wife, son Gregory and daughter-in-law Mary, sisters Rosemary and Mary Helen. He is survived by his son Michael/Mikki (with grandchildren, Lauren/Ian and Jennifer/Sean) and daughter Ronda son-in-law Tom Wiseman (with grandchildren Joshua and Matthew/Jill with great grandchildren Madison, Austin and Lincoln). and his brother David Hunter of Trenton. Friends may visit in the Arthur Bobcean Funeral Home, Flat Rock Chapel on Wednesday, June 19, 2019 from 1:00 pm to 8:00 pm. Funeral Services will be held at First United Methodist Church on Thursday, June 20, 2019 at 11:00 am. Rev. Evans Bentley will officiate the service. Cremation is to follow. In lieu of flowers contributions in his memory may be made to the First United Methodist Church, Flat Rock, MI.

The family of Donald Hunter created this Life Tributes page to make it easy to share your memories.

Send flowers to the Hunter family.