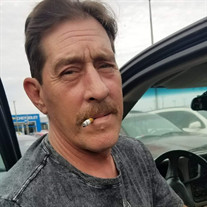 Dale G. Powers, age 60, of Flat Rock, passed away on Monday, January 31, 2022 at his home. Born on August 18, 1961 in Trenton, MI, he was the son of Melvin and Lillian (Maszatics) Powers. On July 24, 1982 he married Michelle Kovich in Rockwood, MI. He was self-employed in the construction industry specializing in drywall work for 40 years. Dale always had a cup of coffee with him. He enjoyed nature, going up north and picking up trinkets for his wife. He was known for his strength and loved cars, mainly collecting old cars that were a "great deal". Great story teller, he always made you laugh. He was married to the love of his life, Michelle. Michelle was his best friend.. Dale was preceded in death by his father, Melvin Powers. He is survived by his wife Michelle Powers; children Michael (Amanda) Powers, Shawn (Jennifer ) Powers, Jessica (Jason Hess) Powers and David (Ciera Newman) Powers; mother Lillian Powers; sister Annette (Joseph) Frebes; grandchildren, Grace Powers, Noah Powers and Abigail Powers. Visitation will be held at Bobcean Funeral Home, Flat Rock Chapel on Friday, February 4, 2022 from 1:00 pm to 6:00 pm. Funeral Services will be held at Bobcean Funeral Home on Friday, February 4, 2022 at 6:00 pm. Cremation will follow. In lieu of flowers, contributions in his memory may be made to the family

The family of Dale G. Powers created this Life Tributes page to make it easy to share your memories.

Send flowers to the Powers family.