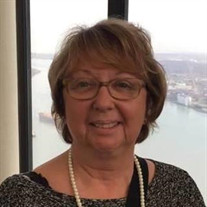 Cynthia Terese Marion (Cindy), age 69, of Flat Rock, Michigan was vacationing in Florida and passed away on Friday, August 16, 2019 at Mease Countryside Hospital in Safety Harbor, Florida. Born on December 27, 1949 in Detroit, Michigan, she was the daughter of Henry and Teresa (Nemeth) Maraj. Cynthia graduated from Holy Redeemer High School in Detroit, then continued her education at Michigan State University earning her Bachelor's Degree in Social Sciences. She was the first of her family to attend college. Cynthia’s first job was with the state of Michigan. Cynthia worked as a Social Worker for many years and practiced in a variety of different functions. However for most of her career, her main area of expertise was discharge planning. She found great joy and satisfaction in assisting families and their loved ones in developing a tailored healthcare plan so that her patients and their families would feel comforted that they had access to the assistance and ongoing healthcare needs once released from the hospital. Cynthia was last employed with Henry Ford Wyandotte Hospital as a Social Worker in their physical rehabilitation unit until retiring in 2012. In addition to her work at the hospital, she led a “stroke club”, which was a support group for stroke victims and their families. She organized speakers to further educate stroke victims and their families, as well as fun activities and holiday events. Cynthia also served on the “Dress Up Wine Down” Committee, which is an annual fundraising event that benefits the Center for Rehabilitation Unit in partnership with Henry Ford Wyandotte Hospital. Cynthia served her community in many ways, by participating in politics, serving or being a member of local community clubs and volunteering. Her political career started by serving as a member of the Flat Rock Planning Commission in 1987. She ran for office and served as Councilwoman in Flat Rock from January 1989 through December 1991 and was Mayor Pro Tem from January 1990 through December 1991. Cynthia also supported and actively campaigned for local candidates in Flat Rock and surrounding community. Cynthia was a writer for the local weekly newspaper from 1983-1984. She was a volunteer for Meals on Wheels, which is a program where meals are delivered to elderly or invalid people who can’t leave their home. Cynthia delivered meals through this program on Thanksgiving day for several years. Cynthia was also a member of the Jaycees, and Kinwas Clubs After her retirement in 2012, Cynthia continued to stay involved in her community. She was as a substitute teacher, volunteered as a poll worker for both local State and federal elections. She was also a member of the Women of the Moose Club of Woodhaven, and continued to serve as a member of the Dress Up Wine Down Committee. Cynthia was always a very active member and volunteer of of St. Roch Catholic Church in Flat Rock, Michigan. Some of her volunteer activities were cleaning the church, making food for luncheons after funerals and she was a 6th grade Catechism teacher. She also actively participated in bible study and various other volunteer opportunities. Cynthia enjoyed being active and spending time with her friends and family. Some of her favorite activities were walking with friends, going to the wave pool, going to the Henry Ford Museum, attending theater, opera and going to the movies. Cynthia was a sports fanatic and watched all types of sports. However, her favorite sport was college football and she loved watching Michigan State University games. She also loved attending baseball games at Comerica Park with her friends and family. Cynthia loved travelling both within and without the United States. Some of her favorite domestic trips were visiting Savannah, Georgia; Sedona, Arizona; Washington, DC, and driving cross country from Los Angeles to Florida with her daughter. Some of her favorite travel destinations were seeing the Vatican in Italy, diving the great barrier reef in Australia, enjoying the beautiful landscapes of Ireland; and London, England. However, most of all Cynthia enjoyed spending time with her friends and family and was a very active social coordinator. Cynthia’s greatest passion in her life were her children and especially her grandchildren. She absolutely adored visiting and spoiling her grandchildren and enjoyed watching their soccer, hockey and wrestling events. Cynthia was preceded in death by her parents, sister Ramona Maraj and brother Thomas Maraj. She is survived by her son David Marion, Jr. (Neena) of Kalamazoo, Michigan; daughter Heather Marion of Clearwater, Florida; grandchildren Rohan, Alekh and Jahnavi Marion, brother John Maraj (Judy) of Southgate and Rita Stoltenberg of Texas. In lieu of flowers contributions in her memory may be made either to the American Cancer Society or Dress Up Wine Down Community Friends may visit in the Arthur Bobcean Funeral Home, Flat Rock chapel on Thursday, August 22, 2019 from 1 PM to 8 PM. Mass will be held on Friday, August 23, 2019 at 10 AM in St. Roch Catholic Church, Flat Rock, Michigan. She will lie in state from 9:30 AM until time of service. Cremation will follow.

The family of Cynthia Marion created this Life Tributes page to make it easy to share your memories.

Send flowers to the Marion family.