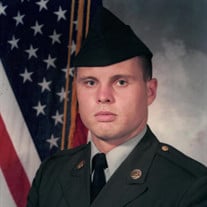 Major Corrydon A. Driscoll III, age 58, of South Rockwood, Michigan passed away on Thursday, October 14, 2021. Born on November 21, 1962 in Trenton, Michigan, he was the son of Corrydon and Catherine (Schoen) Driscoll. He enlisted in the Army in 1987 and ended his highly decorated military career as a Major in the US Army, serving as a Military Intelligence Officer, before retiring after 34 years of service. He volunteered and served in 4 combat tours including 2 in Afghanistan, 1 in Iraq, and 1 in Guantanamo. He was also an electrician for IBEW Local 58 for over 30 years. Corry LOVED the Simpsons, college football, and especially his nieces and nephews. He loved the Lord and lived his life with honesty and integrity. He was quick to laugh and joke with family and friends. He was known for always being there for everyone. He was a member of the Christian Science Society, Trenton, MI. Corry was preceded in death by his brother, William Driscoll, sister, Cathy Jean Driscoll, step father, Cecil Dotson, step brother, Robert Dotson. He is survived by his mother, Catherine Driscoll-Dotson, father, Corrydon A. (Barbara) Driscoll, Jr., brother, Dr. Jeffery (Rebecca) Driscoll, brother, David Driscoll, sister, Amber (Brett) McKenzie, sister-in-law, Brenda Marie Driscoll, step sister, Bonnie Parmalee, step sister, Beverly Barker, step brother, Brian Dotson, niece, Kayleen (Ryan) Tisdall, nephew, William Martin Driscoll, Jr., nephew, Chad Driscoll, nephew, Brandon Driscoll, niece, Natalie Danko, nephew, Austin Driscoll, nephew, Connor Driscoll, nephew, Liam Driscoll. Visitation will be held at Bobcean Funeral Home, Flat Rock Chapel on Tuesday, October 19, 2021 from 1:00 pm to 8:00 pm. Funeral Services will be held at Bobcean Funeral Home on Wednesday, October 20, 2021 at 1:00 pm. Catherine Driscoll-Dotson will officiate the service. Burial will be in Michigan Memorial Park Cemetery, Huron Township, Michigan. In lieu of flowers, contributions in his memory may be made to child related charities to honor Corry's many years of donations to these charities.

Major Corrydon A. Driscoll III, age 58, of South Rockwood, Michigan passed away on Thursday, October 14, 2021. Born on November 21, 1962 in Trenton, Michigan, he was the son of Corrydon and Catherine (Schoen) Driscoll. He enlisted in the Army... View Obituary & Service Information

The family of Major Corrydon A. Driscoll III created this Life Tributes page to make it easy to share your memories.

Send flowers to the Driscoll family.