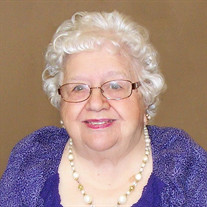 Angela Mary Jones, 94 of Carleton, passed away October 1, 2018. Born May 14, 1924 in Muncie, IN, Angela was the daughter of John and Martha McCabe. She graduated in 1942 from St. Phillip Neri Catholic High School in Detroit. Angela married the love of her life, Reginald B Jones on September 11, 1942. They moved from Detroit to North Adams and then to Allen Park. In 1957 they left city life and purchased a farm house on Creek Road in Carleton. Together they raised their family and the farm held many special memories in Angela’s heart. They celebrated 58 years of marriage until his death June 2002. Angela was a 4-H Leader for several years, teaching countless area girls her skill of knitting, crocheting and sewing. She was a homemaker and sold Avon for many years while raising her nine children. Angela was a fun-loving woman; she led a very full and rewarding life. She truly was happy being with people, socializing and sharing conversation. She enjoyed sightseeing, movies, pinnacle, bunco and bingo. Angela was a member of St. Patrick’s Church in Carleton and its Ladies Altar Society. She was past member of Monroe County 4-H Extension, Carleton Airport Athletic Boosters, Carleton Senior Citizens and Flat Rock Historical Society. To cherish Angela’s memories she leaves her children: Cindy Jones Freimark of Milan, Mike (Brenda) Jones of South Rockwood, Pam Jones & Amy Strutz of Harsens’s Island, Jonathan Jones of South Lyon, Bob (Kathy) Jones of Newport, Frank Jones of South Rockwood, Regina-Jeannie (Jody) Harvell of Carleton and Matt (Lorene) Jones of Blissfield; two siblings; Phil McCabe and Betty Rizzo; 25 grandchildren, 56 great grandchildren and a host of nieces and nephews. She was preceded in death by her parents, husband, siblings Frank, Leo and Margaret McCabe. Sons Jeff Jones (1973), Randy Jones (2004), Granddaughter Anne-Marie Jones (2012) and daughter in law Michele Jones (2017). Friends may visit at the Arthur Bobcean Funeral Home, Carleton Chapel on Thursday, October 4, 2018 from 2-8 pm. A Rosary will be held at 5 pm. Funeral mass will be held at Divine Grace Catholic Church Carleton, MI (St. Patrick’s) on Friday, October 5th at 11 am. She will lie in state from 10 am until time of service. Father Michael Woroniewicz will officiate the service. Burial will follow at Michigan Memorial Cemetery.

Angela Mary Jones, 94 of Carleton, passed away October 1, 2018. Born May 14, 1924 in Muncie, IN, Angela was the daughter of John and Martha McCabe. She graduated in 1942 from St. Phillip Neri Catholic High School in Detroit. Angela married... View Obituary & Service Information

The family of Angela M. Jones created this Life Tributes page to make it easy to share your memories.

Send flowers to the Jones family.