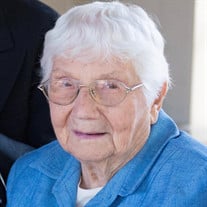 Alberta Herrmann Dombek of New Boston, Michigan passed away at age 95 on December 24, 2018 at her home. She was born on October 4, 1923 on the family farm near Carleton, Michigan to Albert and Ora Herrmann. She was predeceased in 2016 by her husband of 71 years, Leonard Dombek, her life partner with whom she had many adventures. She was also predeceased by her parents, a brother Wayne, and sisters Virginia, Katherine, and Irene. Alberta is survived by her daughters, Candy Hansberger and Cindy Goode, her grandchildren Marc Hansberger (Angela), Rebecca Goode (Jen), and Jamie Goode, and by her great grandchildren Ben and Will Hansberger, and Arden and Kaden Goode. She also had many nieces and nephews, all of whom were an integral part of her close knit family. Alberta grew up on the family farm near Carleton, and lived all of her life within a stone’s throw of this farm, which dates back to the 19th century. During World War II, Alberta worked as a “Rosie the Riveter” at the Willow Run bomber plant. She and Leonard were married in 1945, and a few years later they built a new home right across the street from the farm where she was raised. This would be their home for the rest of their lives. Her two older sisters and their families lived right next door to them. While raising her two daughters, Alberta worked at Glenn Printing Company in New Boston for many years. Like her husband Leonard, Alberta loved adventure. They and the girls spent several winters in the 1950’s at Tavernier in the Florida Keys when this area was mostly untouched by tourism. They all had a part in the construction of a small new house at Tavernier. While on the Keys, Alberta became a master seashell hunter, and would retain this skill for the rest of her life. During the 1970’s Leonard and Alberta drove all over Europe without much planning---they managed to find places to stay and make new friends. They later bought an RV, and drove the Alcan Highway through western Canada and Alaska. After Leonard retired from the insurance business, the adventures really began. They spent several winters in another RV in Florida, and finally in the late 1990’s bought their own place in a retirement park in Fort Myers, Florida. They spent the winter months in Fort Myers for almost 20 years, where “Lenny” and “Bert” were loved by all. Alberta’s twin great grandchildren, Arden and Kaden Goode, were born in 2006 and lived close by in Michigan. Although they were in their 80’s and 90’s, Leonard and Alberta loved watching these kids grow up, spending much time with them and going to as many of their ball games and school events as they could. They felt young again. Alberta was a 4-H leader, a long-time active member of Carleton United Methodist Church, and a 75 year member of the Carleton Extension Club. She participated in senior activities at the Huron Township Senior Center, and stayed reasonably active until right up to her passing. In fact, well into her 90’s she could be seen doing the “Sanibel Stoop” while in Florida looking for unique shells. She died in the home that she and Leonard built 70 years ago. The extended family would like to thank Alberta’s daughter, Cindy Goode, who was her constant companion and support person for so many years. Alberta’s family will greet friends and family on December 28, 2018 from 1:00 pm to 8:00 pm at Arthur Bobcean Funeral Home Carleton Chapel. Funeral services will be held on December 29, 2018 at 11:00 AM at Carleton United Methodist Church. The family requests that, in lieu of flowers, memorial contributions be sent to Carleton United Methodist Church, 11435 Grafton Road, Carleton, Michigan 48117, or to Seasons Hospice and Palliative Care, 27355 John R Road, Madison Heights, Michigan 48071.

Alberta Herrmann Dombek of New Boston, Michigan passed away at age 95 on December 24, 2018 at her home. She was born on October 4, 1923 on the family farm near Carleton, Michigan to Albert and Ora Herrmann. She was predeceased in 2016 by her... View Obituary & Service Information

The family of Alberta Jane Dombek created this Life Tributes page to make it easy to share your memories.

Alberta Herrmann Dombek of New Boston, Michigan passed away at...

Send flowers to the Dombek family.